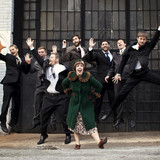 With their little big band lineup of 4 horns, rhythm section, and vocalist, the Mint Julep Jazz Band recreates the hot jazz sounds of the 1920′s, 1930′s, and early 1940’s through arrangements based on original recordings from the jazz age and swing era and original tunes inspired by that time period.

The Mint Julep Jazz Band is based out of Durham, North Carolina and is led by trombonist Lucian Cobb and vocalist/swing DJ Laura Windley, who have put their collective knowledge and love of swing music together to create an ideal dance band for swing dancers. Conceived in the fall of 2011, the Mint Julep Jazz Band formed to fulfill the musical needs of a thriving local swing dance community in the Triangle area of North Carolina, drawing its musicians from the educators and former students of North Carolina universities with vibrant jazz programs. In 2012, after being “discovered” at a wedding, the band recorded an original song for Sesame Street, which aired on April 18, 2013 in an episode featuring Jon Hamm of Mad Men fame. In 2016, the band performed at Lincoln Center as part of their Midsummer Night Swing concert series. The Mint Julep Jazz Band continues to tour and perform for swing dancers, traveling to Lindy Hop and Balboa events from Orlando to Austin to New York and beyond.