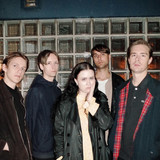 Gothenburg, Sweden's Agent Blå blend post-punk and dream pop into a volatile style they call "death pop." The band emphasized the turbulence of their music on 2017's Agent Blue, while 2019's Morning Thoughts focused on their growing sophistication. Vocalist Emelie Alatalo, bassist/vocalist Josefine Cover, guitarists Felix Skörvald and Lucas Gustavsson, and drummer Arvid Christensen met while they were still in their teens when they performed at different bands at an open mic night. After bonding over their shared love of Slowdive and Joy Division, they joined forces and became Agent Blå (Swedish for "agent blue," a type of arsenic) in 2015. Late that year, they released their debut single, "Beach," on Luxury Records, home to like-minded groups such as Westkust and Makthaverskan. More singles, including 2015's "Strand" and 2017's "Don't Talk to Strangers," "Rote Learning," and "Frustrerad," followed. All of these were collected on the band's 2017 debut album, Agent Blue, which was recorded by Tobias Bauer and Makthaverskan's Gustav Data. In 2018, Agent Blå returned with the Medium Rare EP. The following year, Bauer became the band's keyboardist in time to record the full-length Morning Thoughts, a set of songs that blended their darker impulses and sweet melodies more smoothly than before. Luxury Records and Kanine Records released the album in May 2019. ~ Heather Phares, Rovi