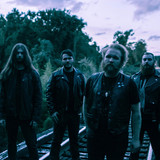 From the southern hills emerges Mo'ynoq, an American Black Metal outfit from Raleigh, North Carolina that brandishes feral riffs and a uniquely humid atmosphere.   June 2016 bore witness to their live debut, as well as their demo: Anguish and Atonement - released on limited edition cassette. After providing tour support for Boston's Lord Almighty shortly thereafter, the four-piece released their second EP: Bardo, in February 2017 on 7” Vinyl. January 2019 saw the emergence of

their debut LP: 𝘋𝘳𝘦𝘢𝘮𝘪𝘯𝘨 𝘪𝘯 𝘢 𝘋𝘦𝘢𝘥 𝘓𝘢𝘯𝘨𝘶𝘢𝘨𝘦 to much critical acclaim.   "It’s always risky to employ genre terms for a band’s music that they may or may not agree with. Mo’ynoq are a black metal band, that much is inarguable, but their music reflects so many changes of mood and pace and incorporates so much instrumental exuberance and intricacy that you might be tempted to classify Bardo as progressive black metal, atmospheric black metal, post-black-metal, or all of the above. But whatever shorthand you might choose to use, the music is electrifying and emotionally powerful." - No Clean Singing