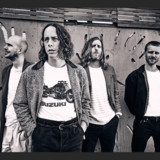 The summer of 2002 was a strange time in East London. A time before social media, before so many of the grassroots venues shut down. Suddenly, rock ‘n’ roll exploded. Everywhere, kids were forming bands. Most of the groups that burst out of this chaotic, creative melee flamed briefly then faded away. Razorlight were different. Formed around singer/guitarist Johnny Borrell, their debut album, ‘Up All Night’ perfectly captured the incendiary energy of the original East London scene and carried era defining hits ‘Golden Touch’ and ‘Somewhere Else’. With their self-titled follow-up, Razorlight truly made the leap onto the international stage. Lead single, ‘In The Morning’, reached number three in the UK, and 'America’ went straight to number one. A third album, ‘Slipway Fires, provided top-ten singles across the UK and Europe. But, across the music scene, the original fire of that 2000s guitar explosion eventually burned itself out. This left a gaping space at the top of British music for ambitious, fun, inspiring rock music. It is this space that Razorlight have come back to fill with their explosivel new album, "Olympus Sleeping". And the band promptly delivers. The album sizzles with groove – its heart beating with an irresistible, live-action, rock ‘n’ roll energy. Nowhere is this more apparent than on standout track “Carry Yourself” – a thumping blend of slick rhythms and epic hooks which should become the anthem not just of next summer – but several summers to come.