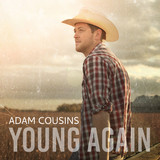 Born and raised in the tight-knit community of Brussels, Ontario, Adam Cousins knows a thing or two about working hard and playing hard -and it shows in his music. In his 2018 debut EP Dirt Road, which has over 40k streams and has been played on radio stations all across Canada, he gave fans a front-row seat to his ability to take small-town living and make it feel larger than life. Years of love for music and performing drove him to pursue his passion in the music industry. You can find him performing at fairs, festivals, weddings, and any event where he can get his hands on a microphone. During his shows, you can expect a lively, energetic performance filled with oldies that will get you on your feet, hot country that will have you singing along, and of course, his own original songs. Produced by CMAO nominated producer Shawn Moore, Adam released the highly anticipated single Riding The Waves in March 2021. His song Young Again will drop this June. Make your way to one of his shows and you won’t be disappointed!