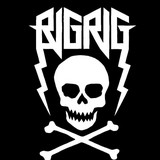 BIGRIG is a rock-trio based in the bay area of California. The three members are Matty Wilson on Guitar and Vocals, Mitch Crews on Bass and Vocals, and Zen Perry on Drums. Matty and Mitch have been close friends and bandmates in different projects for years. They ran into Zen just after their previous band, DREVMERS, broke up in 2017. Zen was a session drummer in town playing with a variety of different projects as a hired gun. The trio met and jammed a few times over the years and could see that they had a love for a lot of the same kinds of music. They shared a wide list of influences that went well together in the creative process, but they hadn't started a project. At the start of 2019 Zen found a studio space in town and was looking for musicians to split the cost with. He hit up Matty and Mitch, and that put them in the same space at the same time. After seriously writing together over a few weeks in the new studio the group was convinced they were on to something special and named the new band BIGRIG. The three are meticulous songwriters and music industry veterans. Their practices and writing sessions usually go well into the early morning working on every facet of the music to give their audiences something they have never heard before, a punch to the gut, a little slap to the face. Since then BIGRIG has made some serious waves as the best new rock band to see in Santa Cruz with their Heavy Riffs, Flying V's and Powerhouse drumming.