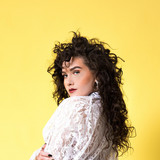 Maria Hazell is a Swedish artist and songwriter who has been active with music since she was four years old. She started as a demo singer for Max Martin, but initially, Maria spend most of here time on her song writing, eager to learn the different parts of creating music. Over time it helped her to develop her own musical identity, which became important when she a few years ago started focusing on her career as an artist. With her unique, fantastic voice and her confidence in every tone she captures the heart of her listeners. In 2014 she released her first single ‘Say It Like You Mean It’, which got her on the list for ‘Women to keep an eye on 2014’ by Spotify and also got her a nomination for ‘Rookie artist of the year’ at Denniz Pop Awards. Since then she has for instance performed with Zara Larsson at the Swedish Grammy Awards as well as supported Bebe Rexha on stage at her show in Stockholm in 2015 and Justin Bieber at his show two shows in Stockholm 2016. 2016 Maria’s lastest single ‘Debut’ was released, which she co-wrote with Thomas Troelsen, a singer songwriter from Denmark. The song has reached more than four million streams and shows how much she has grown since her first single, and we can tell her future is a bright one.