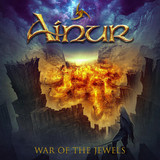 It’s been 17 years since AINUR thought to transform Tolkien’s masterpiece “The Silmarillion” into music. Each member of the band was lost in his own musical themes inspired by Tolkienian mythology. As if hypnotized, they outrageously composed themes for the main characters and started to imagine this huge concept work to which they still work on today. The highly anticipated “War of The Jewels”, which sees the band take an interesting evolution in sound from previous releases. Ainur will completely immerse fans in J.R.R.Tolkien’s war atmospheres. They have imagined every story and every battle and recreate them through unique and deep music. “We always follow the path that Tolkien himself has outlined in his tales, so we tried to create a concept that embraces the Wars of Beleriand throughout the album. Since the topic is a little bit complex this time, we thought to divide the concept into two albums: then, side by side with “Children of Hurin” and “Lay of Leithian”, they will flow into a big opera that will unite the third chapter of Wars of Beleriand and Lays of Beleriand.” The compositional process of “War of The Jewels” has been very long.

They have been working hard composing and arranging their music to create the best tribute to Tolkien’s histories that they can. Fans of Tolkien’s work along with fans of Ayreon, Queen, and John Williams will be surprised by the majesty and the energy of this work. “War of The Jewels” is set to be release on March 19, 2021