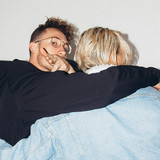 Enter Beach Season. A Canadian duo comprised of Sam Avant and Simon Blitzer exploring the sound existing within the intersection of R&B and Electronic pop music.   Hailing from Calgary, Alberta, a city known for its cold and dry weather, Sam and Simon saw themselves much differently from their city and their contemporaries; a Beach Season in a middle of winter.   Collaborating with one another for over a decade, Sam and Simon first emerged as Beach Season in 2014 with their EP “Internet Evening”. Following up with their first major label release, “Libra Year” in 2016 on Universal Music Canada, Beach Season saw themselves incorporating experimental electronica, retro synths, drum machine samples, and quintessential pop, growing into a sound they can truly exhibit as their own.   This year Sam and Simon strive to express themselves as artists and tastemakers. Their sophomore EP on Universal Music Canada, titled “Time &Place”, is their most realized and expressive project to date, utilizing accumulated influences and sounds from places they visited all over the world during integral periods of their lives over the past years.