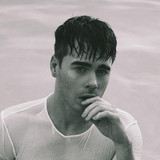 Leon Else is a pop singer/songwriter from the UK. He began writing and recording music at the age of 12 to serve as an escape from his rocky upbringing. Interested in all of the arts, Leon saved his money to attend dance school, and over the years has performed in Kenneth MacMillan’s ballet “Winter Dreams” and musicals, including “Sinatra” and “Oklahoma!” Leon decided to leave the dance world to pursue music. After releasing a series of songs online, Leon was catapulted into the music industry and in 2018, was featured on the soundtrack for Netflix’s “13 Reasons Why.”

After struggling in silence for 27 years of his life with his mental health, Leon sought help. He is now reclaiming his independence as an artist and individual, and creating music he feels is authentically himself. He released his first song of 2019, “Change Up” in April. Leon has been featured in Billboard, PAPER Magazine, People Magazine, VH1, and Galore.