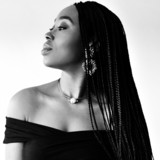 'There is so much beauty, strength and vulnerability in the women and girls I have around me. We are not one dimensional and that’s inspiring. With 'Courage' I celebrate the courageous spirit of women.' Courage (Tu Verras) is the third single of the album Family and Friends, Ntjam Rosie’s 6th studio album, released February 2020. The album Family & Friends was produced by The Eminent: Bart Wirtz, Lucas Meijers and Oscar de Jong (Kraak & Smaak). The 2017 album Breaking Cycles by Cameroon-born Ntjam Rosie (1983) received raving reviews in all major papers and magazines. English platform Soulandjazz.com chose it for Soul Album of the week and Echoes Magazine voted it Soul Album van 2017! Recently she has been touring theaters in the Netherlands and Belgium with the controversial production Dear Winnie, a co-production by the NNT and the Flemish KVS. Previously Ntjam Rosie has toured Dutch theaters with the Artvark Saxophone Quartet (Homelands), was featured in Urban Myth’s We hadden liefde, we hadden wapens and in her own theater production Breaking Beats. Ntjam Rosie has played on many stages and jazz festivals in the Netherlands – including the North Sea Jazz Festival – and has toured in in over 20 countries. She has appeared numerous times on Dutch national radio and TV programs. Stay tuned for new music by the end of 2021!