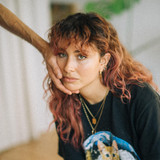 Le Nais is an artist, composer and songwriter from Barcelona. Her debut EP ‘When I can’t speak but I can sing’ has been launched in February 2020.   Following several years spent at a music conservatory, she took a pause from the art itself due to a sense of disenchantment and, despite acknowledging the fundamental role that music had played in her life. A few years later, she started composing again. Every afternoon, a guitar in hands, on her living room floor. She once more felt the ardent desire to connect with her primitive self and express emotions through music. A tough chapter in her private life led her to the writing of lyrics and poetry as a form of cathartic experience, in view to reflect upon hardened sentiments and release them. In parallel, she kept composing and exploring diverse musical avenues, thereby delineating the sound of her first songs.   Nominated for best music video and new artist at Premios Min 2018 with her first single 'Dancing'.   With only three singles out, she was booked for PRIMAVERA SOUND 20’ and 21'. Due to the sanitary crisis though, her performance had to be re-scheduled to the next edition 2022. Despite the situation she has been presenting her EP in live concerts across numerous festivals in Spain, including PEDRALBES FEST and MMVV.   Le Nais has been releasing new songs, a single called ‘Fear’, and the latest double a single, 'Unshape Love'.   As of now, she focuses on writing and making new music.