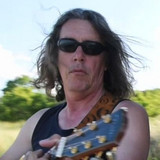 Desmond Grundy's hooky, indie, guitar music is seeded in the creatively structured 4/4 song styles of the British Rock and R&B invasions with brief migrations into Country, Pop and Punk. His sound resonates genuinely from his steel-town roots, with musical training, touring and gigging experiences taking up any slack. Songwriting and recording activities over the last 16 years generated three well-reviewed albums, an EP, thousands of song streams and a popular following on web radio. This refreshingly original work has its own sound and its own niche, with influences from songwriters like Iggy, Dylan, the Velvets and the Kinks. Lead singer and songwriter, Desmond Grundy, has an accessible creative signature. His studied musical influences end where his stab at artistic genius begins—somewhere between 1977 and this moment of now. http://www.grundymusic.com/ https://itunes.apple.com/ca/artist/desmond-grundy/id274623664