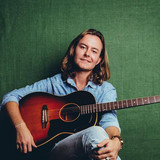 Dee White makes classic-minded country music for the modern world. Raised in small-town Alabama, he’s a raw, natural songwriter, spinning the sounds and stories of the American South into songs that nod to the past while still chasing down new horizons. It was Harold Shedd — the music mogul responsible for signing Alabama, discovering Shania Twain — who encouraged White to pursue music. Impressed with Dee’s unschooled, captivating voice and sharp writing chops, Shedd became an unlikely mentor. With his support, Dee began turning his focus toward songwriting. Before recording his debut album White spent most of his high school free time on the water in Slapout, Alabama. A competitive fisherman, he visited Lake Jordan and take along his phone, soundtracking those daily fishing trips with classic country staples. Dee began making trips to Tennessee, where he found another mentor in Dan Auerbach. Together, the two co-wrote a number of new songs, which they whittled down the list of songs to two-dozen and then recorded all twenty-four songs in two weeks, using Auerbach’s studio. Southern Gentleman features ten of those tunes, along with guest appearances by a number of titans from the folk, country, and bluegrass worlds. Stripped free of pitch correction and studio trickery, Southern Gentleman is an honest portrayal of a 20 year-old natural. Dee White’s songs are classics-in-the-making, inspired by traditional sounds but happily rooted in the 21st century.