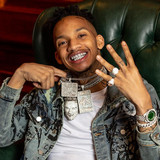 Stunna 4 Vegas is a North Carolina rapper with a brusk, antagonistic approach influenced by fellow Southerners such as T.I. and Gucci Mane. Within a few years, he went from an aspiring teenaged MC to a respected underground figure to a major-label signee. After he built up a sizeable discography of mixtapes and stray tracks, and linked up with DaBaby on the single "Animal," Stunna made his commercial full-length debut with Big 4x (2019), and soon thereafter cracked the Top 30 of the Billboard 200 with Rich Youngin (2020). Born Khalick Caldwell, Stunna started rapping during his last year of high school in his native Salisbury, a city between Winston-Salem and Charlotte. As simply Stunna, he made small strides independently with releases including 4 Way or No Way and Stunna Season 2. Later in 2018, he sought DaBaby for a guest verse on the single "Animal" and subsequently signed with the emergent Charlotte artist's Billion Dollar Baby label. Stunna and DaBaby continued to record together, and they both eventually landed major-label deals with Interscope. In May 2019, Stunna made his Interscope debut with the full-length Big 4x. A number 50 entry on the Billboard 200, the album featured DaBaby on "Ashley" and "Sticks," Offset on "4th of July," Lil Durk on "Durkio," and additional collaborations with NLE Choppa and Young Nudy. Stunna returned only eight months later with 2020's Rich Youngin. It reached number 29, supported by verses from DaBaby and Lil Baby on the lead track "Do Dat." ~ Andy Kellman