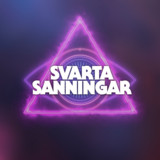 Svarta Sanningar (Black Truths) is a Swedish band playing occult post-rock, goth & metal. If you are attracted to the alternative rock band kent (Swe) or Depeche Mode in their darkest moments, you will love this. Other references worth mentioning are of course Ghost

and Opeth.  The band’s journey began in 2017. The founder of the gothic metal band Beseech, Klas Bohlin (vocals) and Jonas Persson (guitar) were talking music & records, but were also a bit excited in founding a new band. Svarta Sanningar was formed shortly after when Mattias Lejon (bass) & Håkan Carlsson (drums / Beseech), became a part of the dark musical vision.  Besides the music, Svarta Sanningar has built an entire concept around a fictional backstory, which includes an occult order society with the same name as the band. According to rumors, the order was located at the Swedish island Fjärrö during the 70s.    E-mail: info@svartasanningar.se  https://svartasanningar.se