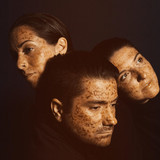 You watch the uncertain waters below, the wind sweeping across the horizon, the sky a wild mess of greys and blues. You feel like you’ve been here before, standing on this very same edge, and yet you know it is foreign territory. You have no idea how this will go, where you'll end up. But something inside says: "Don't think about the odds." It was in late 2016, that Montreal-based musicians Chloé Lacasse and Geneviève Toupin, both singer songwriters and pianists, along with drummer Vincent Carré, decided to come together to sketch out a few songs, just to see where uninhibited brainstorming might lead. New rules bring new possibilities. One person’s writer’s block becomes another’s building block. Dead ends become playgrounds. Trust the flow. Don’t think about the odds. -CHANCES CONCERT There's something empowering about seeing Montreal's CHANCES play live. Lead singers Chloé Lacasse and Geneviève Toupin mirror each other with their synth/keyboard set-ups while drummer Vincent Carré sits directly in the middle, forming a circle with the audience and giving the show a sort of pop ceremony feel. Their unique sound is a blend of influences and cultures, mixing indie-pop with a hint of electro and world music, underscored by the english, french-canadian and Metis backgrounds present in the trio. With harmonies weaving in and out of thumping drums and sparkling synths, CHANCES’ otherworldly pop songs strike like a stream of light to the gut.