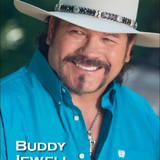 Country singer Buddy Jewell's meteoric rise caused him to be tagged an "overnight sensation," but looking back at his ten years in Nashville obscurity, Jewell considers himself a modern-day Rip Van Winkle. A native of Arkansas, Jewell's earliest musical memories are staring into his parents' radio looking for the "little people" that he thought were living inside. Years later he bought a guitar for ten dollars from a schoolmate and purchased some instructional books with the money he earned bagging groceries. By age 21 he decided he wanted to be a singer and headed to Camden, AR, to join the band White Oak. Four years of touring with the unsigned band was enough and Jewell moved to Dallas, TX, to star in a gunfight show at the Six Flags theme park. Entering a singing contest sponsored by the group Alabama landed him an opening slot for the band and enough inspiration to move to country music's capitol, Nashville, in 1993. By 1995 he started a job as a demo singer and recorded over 4,000 songs by writers who hoped to have their material cut by Nashville's greatest (some of the songs ended up being recorded by George Strait, Trace Adkins, and others). In 1998 he appeared on Bill Engvall's "I'm a Cowboy" single and in 2002 he sang backup on Ray Price's album Time. Things changed rapidly in 2003. On May 3 of that year, Jewell became the winner on country's answer to American Idol, Nashville Star. By May 5 the "Help Pour Out the Rain (Lacey's Song)" single was delivered to radio and on May 17 he was performing at the Grand Old Opry. On July 1 Columbia issued his self-titled debut album with superstar Clint Black in the producer's chair. ~ David Jeffries, Rovi