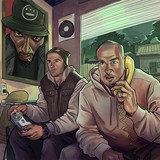 In 2003, two regularly inebriated high school dudes formed a friendship through the common love of hip hop. In an era on the fringe of digital takeover, ILL EQUIPT was formed after recording their first track on a laptop Adelaides East. From their first ever gig at a high school music workshop to securing a spot at the infamous Big Day Out festival, they’ve enjoyed performing along the way. With a few mixtapes and 3 main releases, their discography compliments their organisational skills in releasing music on time. It also takes you on a 15 year journey through the minds of a two friends having fun making hip hop in Australia.