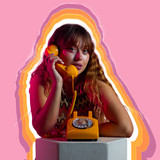 21 year old Emma Mae has been releasing songs since 2019 when she dropped her eyebrow-raising debut 'Fuckboy' on the birthday of the boy it's about. Since then, her songs have broadened our understanding of her antics, her type, and her taste in drinks and she becomes bigger, better, and seemingly more bitter with every release. Emma has recently been in the Top 40 of the iTunes Pop Charts and has been supported consistently by BBC Introducing in the East Midlands. Her songs have a way of connecting with everybody, as she discusses situations that most people can relate to in her own way, her personality and lightheartedness shining through in every lyric. ‘Emma Mae’s debut offering is somewhat reminiscent of the work and catalog of Amy Winehouse and holds similar promise‘- Warlock Asylum on ‘Fuckboy’ 'Emma’s voice is warm and rich and although she never falls into the trap of showing off, the power in her voice sits nicely as a potential. You can hear it is there if she needs to use it, but the lyrical honesty of the tune is perfectly reflected in the way Emma carries the song and tells the story she needs to tell.' - About Sound on 'What It's Come To'