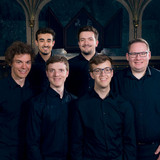 Experiencing the diversity of singing, this is the motto under which the young vocal ensemble ‘Varietas Cantandii’ brings music of all ages to the ears of the audience since its foundation in 2012. The name Varietas Cantandi derives from the Latin expression varietas cantandi and represents the main idea of the ensemble: ‘the variety of singing’. The repertoire consists of works of various composers, epochs and styles. At first, there are the antiphonal chants of the medieval. Regarding the Renaissance, the singers are intrigued by the sacred music works by Palestrina or Vittoria and madrigal chants composed by Morley or Isaac. Music by Johann Sebastian Bach and Felix Mendelssohn also belong to the repertoire, as well as the modern sacred music compositions by Francis Poulenc or the contemporary works by Ola Gjeilo and Krzysztof Penderecki. In the autumn of 2019, the ensemble finalised its second recording carrying the title English Tunes, which will be released in spring 2020. Visit us at https://www.varietas-cantandi.de/