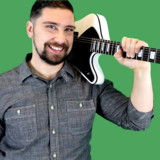 John Kiernan is a wrestling entrance theme song composer from New Jersey and is the guitarist for rock band It Lives, It Breathes. His music releases encompass a myriad of styles from rock to metal, hip-hop to dubstep, jazz to video game piano music, and more. John has written over sixty themes for wrestlers in various promotions such as Ring Of Honor, All Elite Wrestling and New Japan Pro Wrestling, as well is the in house composer for the United Wrestling Network.

John has also studied under the tutelage of Italian composer and guitarist Daniele Gottardo and Guitar World/Premiere Guitar Magazine’s columnist and Chimaira guitarist Emil Werstler. John has performed domestically and globally at MusikMesse in Shanghai, China and has been featured in Guitar World with his previous work with instrumental metal giants Etherius. John was also featured as the lead guitarist for the Pokemon Main Theme from “Billboard’s Dec. 2018 Classical Charts” record with esteemed video game music legend