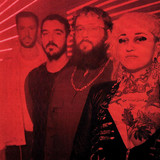 Their first R&B Grammy nomination, for “Nakamarra,” was followed by another for “Breathing Underwater,” from their second LP, 2015’s Choose Your Weapon. They’ve been sampled on songs by The Carters (Beyonce + Jay-Z), Kendrick Lamar, Anderson .Paak, Chance The Rapper, and Drake, with whom Nai Palm collaborated on his Scorpion album. Mood Valiant is the product of four years of writing, recording and touring, interrupted by a significant event: Nai Palm’s diagnosis with breast cancer. Her recovery and the band’s subsequent trip to Brazil to work with arranger Arthur Verocai led to “Get Sun”, which soars with Verocai’s orchestrations and rides the knotty grooves that Hiatus fans have come to expect. Through it all rings Nai’s singular verse and voice. “When you think your life is going to be taken away from you, it makes you think about who you are,” Nai says. “My only wish is to live and offer my experience of time and beauty.” Mood Valiant is out now via Brainfeeder Records / Ninja Tune.