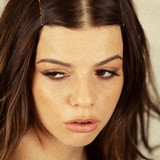 Offering up clever and catchy confessions, magnified by expansive pop soundscapes, Australian-born and Los Angeles-based singer and songwriter Ivy Adara encourages such a connection. Her humble beginnings only elevate her undeniable talent and influence. Ivy recognized her path early on. Bored during a family holiday, she wrote her first song at seven-years-old. From then on, the budding talent simply never put the pen down. Leaving her home town in 2018 after signing publishing and label deals within an incredible 6 months, she now celebrates a discography of total streams exceeding 200 million on Spotify alone. Becoming an in-demand talent behind-the-scenes, she seamlessly transitioned into the spotlight as a solo artist with her first EP Intraduction. She then went on to perform co-written song “Bye Bye” at Coachella and on many more stages with DJ, Gryffin. Acclaim enthusiastically follows her as an artist and writer from the likes of Billboard, LA Times, People Magazine and more. After spending the last 2 years focusing solely on penning her next artist project in the company of world renowned producers, her next body of work is set to be released in 2021. Her voice is warm and empowering, introspective and progressive, vulnerable and easy going. From her mysterious and unique perspective, she intertwines hope and pain to tell her stories.. and the good news? This vivacious young songbird has only just begun.