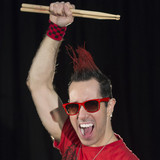 DRMAGDN: Cyborg Drummer/DJ is an Electronic Artist, Producer & Music Director from NYC. He has played The Winter Olympics, Lollapalooza, Warped Tour, Lincoln Center, Carnegie Hall, Metlife Stadium, Bamboozle Fest, MTV’s TRL, AOL Sessions, The View & The Today Show. He has Toured 24 Countries, 43 US States plus can be heard on 175+ Records. He is in the Sick Drummer Hall Of Fame, in Blender Magazine's "Best Drummers Of All Time List" and AllMusic says that "Drummer Charlie Z must be heard even to be believed." DRMAGDN has over 1.2 Million YouTube views, 400k Spotify plays with over 60k Monthly Listeners, 175k Instagram followers, 1.4 Million Soundcloud plays and 2.6 Million TikTok views. With just 6 singles out off his debut "Escape From NYC" record, DRMAGDN has over 5.5 million total plays/views across all platforms in less than 1 year of releasing music.