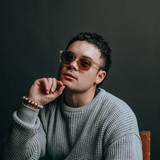 Boy Graduate is an Australian/Filipino recording artist/producer based in Melbourne, Australia. He is most known for his break out single ‘I'm Not Ready' featuring Chicago based Brian Fresco (SaveMoney Gang) which gained national recognition on Triple J and the HIT Network. Having independently toured across Australia numerous times and landing main support for Bliss n Eso’s sold out ‘Dopamine Tour’, Boy Graduate is no stranger to working a crowd, warming his way to a loyal following that has seen him showcase his life through intimate and meaningful offerings such as 'Teresita' and ‘All My Life’. In 2021, Boy Graduate became the first Australian to secure representation by Warner Music Philippines under the premise of the new "Global Pinoy Movement" - also dubbed as the #GLOPM movement. He's connected with foreign Filipino's across the globe and has shared studios with the likes of Catriona Gray (Miss Universe 2018) and interviewed superstars with Filipino roots, such as Saweetie. The love of his Filipino culture stemmed from living in Cebu throughout 2019 and 2020, describing it as a re-awakening and hopes to continue building and spreading his culture throughout the globe.