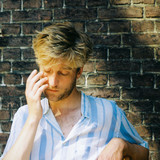 Guitarist and songwriter Johnny is born in Amsterdam, but is slowly but surely carving out a space for himself in the American folk tradition. His acoustic guitar and a set of cowboy chords establish the foundation of his debut album Collecting Dinosaurs, a series of songs inspired by classic folk, rockabilly and exotica styles. For his lo-fi indie folk sound, Johnny doesn’t need much more than a subtle bass line, minimalistic drums, and a synthesizer or pedal steel. Johnny is the stage name of Joost Abbel (Amsterdam, 1985), known in the Amsterdam music scene as the lead guitarist for Zorita, Dieter van der Westen and Juan Juan. Last spring, he decided to record his own music. He fine-tuned his lyrics, transformed basic recordings on his phone into actual tracks, and started a crowdfunding, after which he could make his dream come true: a debut album on vinyl. Collecting Dinosaurs is a raw and intimate debut album, on which Johnny and his band (producer/guitarist Merlijn Verboom, drummer Gijs Anders Van Straalen, bass player Robert Koomen) explore the limits of homemade valve amps and a collection of mics from the fifties. The sounds of Neil Young, Beck and Mark Knopfler are influential to the album, which was recorded on old school tape machines and mastered by Grammy-nominee Attie Bauw (The Scorpions, Judas Priest).