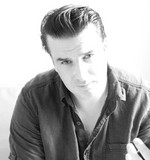 Starting his first band in the UK at the age of 15, Dominic formed various different bands in the UK, then eventually moved to Australia. There, he put together Dominic Halpin & The Suspects, who became well respected throughout the Sydney area where they were based. Some years later, Dominic returned to the UK and, and Dominic Halpin & The Honey B's were born. They have performed at many high profile events and for such clients as Elle McPherson and Simon Cowell. Dominic has written many songs, some of which have been used in film & TV. Quite recently, having built up a large collection of these self-penned songs, Having always wanted to record in Nashville, this was his first choice for a recording studio. Next, he considered who he would ideally like to have as part of the recording. As a long time admirer of Ronnie Tutt (Elvis’s drummer), Ronnie’s name was put on the wish list. After a few emails, Ronnie Tutt was in! Off went Dominic to Nashville and the CD “4000 Miles” was recorded. A collection of retro-style songs with a slight country favour, “4000 Miles” has something for everybody.

Dominic performed one of the tracks - "White Horse" - as part of a performance for one of Bob Harris’s “Under The Apple Tree” sessions. Dominic continues to write songs, including “One Night In Nashville” which he performs during the UK touring show he stars in with his band The Hurricanes - “A Country Night In Nashville”.