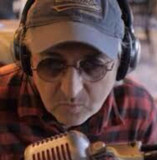 LATEST ALBUM - Volume 3 - A Voice in the Wilderness NEXT SINGLE - TAKING TO MYSELF - June 23rd NEXT ALBUM - GATEWAY TO PARADISE - 02/02/22 Singer songwriter David Vaters released his third solo studio album in 2021 - A Voice in the Wilderness Volume 3,’ the record came on the heels of Vaters Volume 1 & 2 solo work which was released to critical acclaim by Huffington Post and others in 2017 & 2018. Infusing Americana & Alt Country music with elements of rock & active rock. Vaters has quickly defined himself as a wholly unique talent in the music industry. The veteran performer and songwriter honed his skills for many years performing/recording on both sides of the Atlantic.  Huffington Post, stated, “David's music is creative and original, suffused with an ardent spiritual awareness rare in today’s music industry.”