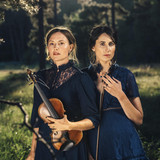 Pop with a folk soul. Or folk with a pop soul, depending who’s listening. Långbacka/Bådagård are Swedish singers and multi-instrumentalists Maja Långbacka and Matilda Bådagård. Their debut album has been described as ”the soundtrack of a fairy tale” and ”as if Regina Spector had moved to the Scandinavian mountains and learned how to play the fiddle”. Or, simply, as pop music with a great portion of Swedish folk music. Autumn 2018 Långbacka/Bådagård released WAKE US UP and toured in Sweden, Norway and Finland together with world music star Pekko Käppi from Finland and blues/folk singer Jörgen Sandvik from Norway. In 2019, they have toured intensively all over Sweden and Finland. April 24th 2020, the duo released their second album EVERY LITTLE WHISPER TURNS INTO A ROAR. In 2020/21 Långbacka/Bådagård were asked to compose the original score for motion picture GLACIÄR and the soundtrack was released in April-21. ”Succeeding in their aim to search for a new path must be considered a great deed. Incredibly impressive that they sound like no one else.” (Kulturbloggen)