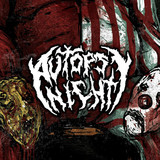 Autopsy Night is a Russian death metal band that was formed in 1996. It was originated in a small town of Arkhara, Amur region in the Far East of Russia. Since 2003 the band keeps performing in Sakhalinsk region and regularly plays at metal fests around Russia as well. In 2012 AU signed to “Inverse Rec.” (Finland) for distribution of “Born to Kill” album. In 2016 “Desecration of the Dead” release was announced by “SoundAge” (Russia) and “Sevared” (USA). In 2018 “Anatomical Integrity Dissolution” will be distributed by “SoundAge” (Russia) and “Sevared” (USA) as well.