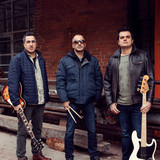 Kiosk is a pioneering Iranian rock band (The Berlin Daily Newspaper) founded by Arash Sobhani in Tehran in 2003. After censorship and restriction by Iranian authorities, its musicians immigrated to the U.S. and Canada. The band has since toured throughout the world and released 10 albums. Kiosk is known for its satirical lyrics, which provide a socio-political commentary of life in Iran, as well as its blend of several music styles, from Iranian folk to gypsy jazz to rock. Kiosk's music has been described by BBC World as "songs that speak to a generation...Kiosk's stinging political satire is hidden within its blues and folksy sound." Haaretz has referred to Kiosk as the most popular Iranian rock band in the Iranian diaspora, while Ahram Online describes how the band gives a voice to their generation. Kiosk's live album "Triple Distilled," recorded at Yoshi's Jazz Club, was chosen by presenter Mark Coles from BBC World's "World of Music" as one of the ten best world music albums of the year, alongside such artists as Paolo Conte and Ali Farka Touré. TIME Magazine has called Kiosk "a band that can criticize the Iranian government without retribution," while Frontline PBS has praised their "eclectic sound that incorporates a multitude of instruments and styles." Current Kiosk members include Ali Kamali (bass, recording engineer), Arash Sobhani (lyricist and songwriter, guitar, vocals) and Shahrouz Molaei (drum).