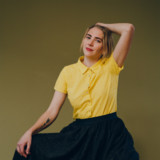 Marthe Valle is a Bergen-based artist, singer and songwriter from Harstad, Norway. Her distinctive voice and down to earth lyricism about universal questions and issues, has gained her a trusted audience. Her debut album It’s a “Bag of Candy” (2005) won her a Norwegian Grammy, followed by “Forever Candid” (2008). With “Fant fram” (2014) she switched to singing in her native tongue, and both this and the follow up album “Alt som ikkje kan sies” (2017) has seen great support from radio with several A-listings on NRK P1. “RO/URO” (2018) is a conceptual album, originally commissioned by Festspillene i Nordnorge as a live performance. Thematically, it explores questions about the human condition in todays society, and how a fast lane lifestyle is distracting us from the true values of human relationship and inner balance. 2020 brings new music. «Makta og kjærligheten» is the first single from Marthe Valles upcoming album, due release this fall.