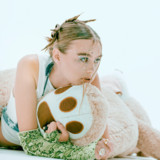 Swedish songwriter and artist Paula Jivén from Gothenburg made her debut appearance for the public at age 14 with her rendition of Michael Jackson’s “Billie Jean” on Sweden’s Got Talent in 2018. A cover that gave her a Golden Buzzer and that subsequently went viral, amassing over 4 million views to date. She has since then developed her songwriting talent together with Warner/Chappell and currently shares her management with the likes of Imagine Dragons, Clinton Kane, and The Killers (Reynolds Management in Las Vegas, US). Paula Jivén makes spellbindingly original pop music, each song sparked from her radiant imagination. At just 17-years-old, she’s already cultivated a truly singular voice as an artist, one that defies all expectations in favor of following her most playful and daring instincts. With a self-described mission of “disrupting the comfortable and comforting the disrupted,” Jivén is set to deliver a debut body of work revealing her supreme gifts as a storyteller and the tremendous power of her captivating voice.