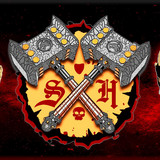 SONGHAMMER is the ultimate rock band. These juggernauts of stage and song are a crowd-pleasing, epic rocking, hell-a-fun act. The band is always up-armored and ready to rumble with heavy rock, pop, metal, hip-hop, and acoustic ballads. SONGHAMMER's epic music is inspired by the world of online gaming, fantasy, science fiction, and fueled by caffeine, sorcery, and ramen. SONGHAMMER is the creative brainchild of Ben (ShredHammer) Stewart and Dustin (CroonHammer) Miller. These titans of rock have combined forces to create a style of music that is a perfect soundtrack for the PVP and PVE video gaming community, the ComicCon community, sci-fi enthusiasts, fantasy-heads, and cosplayers around the globe. With the addition of guitarist Devanand (DeathHammer) Bassanoo and drummer Jose (TimeHammer) Perez, SONGHAMMER has become a force to be reckoned with! SONGHAMMER's music videos for Eat Us Alive and LEGION were both recently featured on the World of Warcraft game launcher! Disclaimer: SONGHAMMER is epic music for epic people. Non epic people are welcome to listen and, by virtue of doing so, may become epic themselves. SONGHAMMER is rock. SONGHAMMER has game. SONGHAMMER is the score to YOUR epic battles. SONGHAMMER is always on the winning side. Join us the mighty SONGHAMMER... and LIVE. HammerHeads Unite!