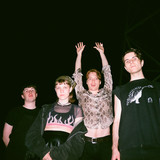 Across the six tracks which comprise Eventually, Toronto band, The Effens’ upcoming third EP, a dark, razor-sharp, grunge-glam sound emerges. Due out July 30, 2021 via Hidden Pony and the band’s own LootBag Records, Eventually draws inspiration from ‘90s grunge sneer and early-aughts indie-rock cheek. Combining these elements with honeyed pop melodics and contemporary post-punk ingenuity, an unquantifiable element is added to build a grimly glowing and incredibly fun collection. The band, composed of vocalist and guitarist Austin Nops, Paul Theo (guitar and synth/samples), Hannah Weber (bass and vocals), and Fabian Oblivion (drums), use their DIY approach on Eventually to reveal a keen melodic sensibility and an insatiable urge to distort that sensibility to create something new. The Effens have created an EP that is essential and accessible, something which at each turn blasts out emotional sonar pings that hit deep and bounce back something newer and weirder and, somehow, better.