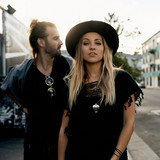 Welcome to an addicting swiss sibling alliance called Zibbz. Their music is blues infused indie-pop with a massive backbeat and synth-driven hook lines. Coco's powerfully-soulful voice is a mix of pop and emotional growl, while multi-instrumentalist Stee produces the music. In 2011 Zibbz set off a buzz in Europe with their own reality show on Music-TV ,Joiz‘ and they return to play the European festival circuit every year since. Their recent record “It Takes a Village” hit the national itunes Pop Chart at #2 as their song "Children of the Digital" ran on 'MTV - Fresh Faces' for 2 months. In May 2018, Zibbz represented their home country of Switzerland in the biggest music-tv show to date - the Eurovision Song Contest (200 million viewers!) - which got them over a million Spotify streams & gained press attention from all over the world! Zibbz are known for entertaining their community with weekly 'Onetake Monday' videos on Youtube and