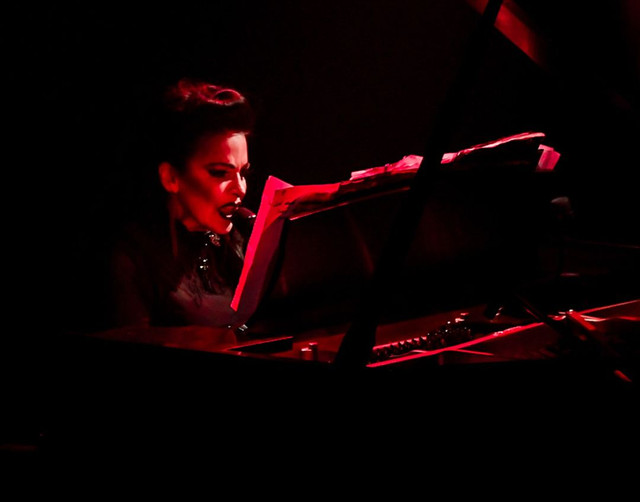 A fiercely confrontational avant-garde performer noted for her wailing, four-octave vocal range, Diamanda Galas was born and raised in San Diego, California. The daughter of Greek Orthodox parents, her singing was roundly discouraged, although her prowess as a classical pianist was nurtured; ultimately, her strict upbringing resulted in a reckless, drug-fueled youth prior to her entrance into the University of California's music and visual arts program. Galas made her performing debut in 1979 at France's Festival d'Avignon, which led to an invitation to assume the lead role in composer Vinko Globokar's politically-charged opera Un Jour Comme un Autre. In subsequent solo performance-art pieces like Wild Women With Steak Knives and Tragouthia apo to Aima Exon Fonos, Galas further honed her unique, shattering vocal style, inspired by the Schrei ("shriek") opera of German expressionism (a form employing a system of four microphones and a series of echoes and delays). Galas made her recorded debut in 1982 with The Litanies of Satan, a provocative work comprised of a vocal adaptation of a poem by Charles Baudelaire. After the prison-themed performance piece Panoptikon (documented on a self-titled 1984 release), she began developing a trilogy of albums known collectively as The Masque of the Red Death; released independently between 1986 and 1988 as The Divine Punishment, Saint of the Pit and You Must Be Certain of the Devil, the three records catalogued Galas' litany against the AIDS epidemic, which claimed her brother, playwright Philip-Dimitri Galas, in 1986. With 1990's The Singer, she made her first subtle advances into the realm of pop music; reprising some of the same gospel material which snaked through The Masque of the Red Death, the record also featured her covers of Willie Dixon's "Insane Asylum" and Screamin' Jay Hawkins' "I Put a Spell on You." 1993's Vena Cava, an a cappella effort, preceded 1994's The Sporting Life, a collaboration with former Led Zeppelin bassist John Paul Jones. A record of Galas' 1994 radio work Schrei X followed in 1996, in tandem with her first book collection, The Shit of God. She returned two years later with Malediction and Prayer.