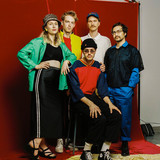 Victoria, BC art-pop quintet Bridal Party have always had the goal of making pop music they like. Now with the approaching release of debut full-length Too Much (due August 23rd on Kingfisher Bluez) the band find themselves at a critical moment: as songwriters and collaborators presenting their personal vision. Beatroute (BC) magazine describes Bridal Party as “a perfect marriage of indie pop and soul.” The band recorded Too Much over three separate week-long immersive studio visits in 2017 and 2018. This disparate recording process would ultimately undo and reform everything the band knew about their sound. A playful and unflinching lyrical voice was honed, drawing on themes of care and self-love as well as their sombre opposites. The resultant record is a vibrant collection of songs of uncanny intimacy, thriving from experimentation in studio while remaining honest to the band’s live set. Whether it’s the confessional lyricism and feathery textures of “When I’m Naked”, the plaintive riddle and bedlam of “Armour”, or the celebratory disco of the title track, Too Much shines a light on the band’s interior joys and terrors in equal measure. A broad sonic landscape that shares territory with Crumb, U.S. Girls and early work of The Cardigans, Too Much is due Friday, August 23rd, accompanied by a relentless tour schedule.