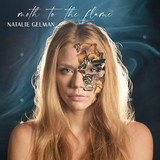 Attraction is inexplicable. It’s pheromonal, quasi-spiritual, physiological and physical. For songwriter-pop artist Natalie Gelman, the pull to music has almost been innate. As an eight-year-old, she freely roamed the wilds of New York City, stoking the fire of her artistry, spurred on by violin and piano lessons, and her innate singing and songwriting gifts. The Ojai, California-based artist has aptly titled her milestone release, Moth To The Flame. The 13-song album is a sublimely melodic and heartfelt blend of polished production, telepathic musicianship, and finely crafted pop with emotionally raw lyrics and storytelling. Natalie’s songwriting recalls sophisticated-but-still-pop tunesmiths such as Jewel, Sara Bareilles, and Jason Mraz. Her songs are subtly lush, detailed with ethereal atmospherics, majestic cello flourishes, chiming electric guitars, stately piano, and layers of dreamy vocals. “I have put years into this album. While working on it, I got married, lost my mom to Alzheimer's, and had the opportunity to open for major artists,” Natalie says. “The songs on the album were written before going through those things, but the pain and passion are in the performances and recordings. These songs have taught me to focus on the love you can give and the integrity with which you live your life.”