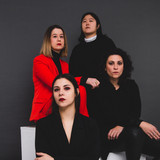 Hailing from Spain, Brazil and London, GHUM bring together a mesmerizing, diverse mix of grunge, cold wave and post-punk. Their flowing, organic sound forms the creative spark "The Coldest Fire" - recorded with producer Adam Jaffrey (Palace, Crows, Night Flowers). The EP takes GHUM into a hostile and melodic direction; fusing together gothic and post-punk influences such Soft Kill, Drab Majesty and the Cure with the more abrasive sound of early era PJ Harvey and Chelsea Wolfe.

Their latest single, “California (Edit),” is incendiary and written at a pace that captures the natural energy of GHUM’s fiery and renowned live sets. Crowned a ‘One to Watch’ by The Observer, GHUM's "intensity provides catharsis” and Metro has praised their “darkly dramatic” sound. The band have received extensive radio play across BBC Radio 6 Music, including a visceral live session for BBC Introducing and a much-coveted C-List playlist add on the station. Recent headline shows in London have all sold out, causing The Line Of Best Fit to describe discovering “a band on the rise" and "a live force to be reckoned” with.