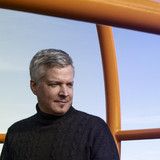 After his teenage fascination with electronic music and synthesizers, Sandy Kamerzin, a.k.a SKy76, developed over the years a mix of influences between electronic, classical music, and movie soundtracks, under the term "Cinematic Electronica". Based in the Swiss Alps region, SKy76 began his music journey as a keyboard player in various bands and realized his long-time dream of becoming a graduate sound engineer in the early 2000s.

But not wanting to limit himself to a particular style or a purely electronic sound, his compositions became, over time, more diverse and "cinematic", with a stronger emotional and imaginary side. In 2008 the first self-produced album "Deconstruction" was released. And in 2012, the second album "Close-Up" defines the "SKy76" sound even better. Classical music influences took a greater part on the whole album, thanks to a violonist and female soprano. The piece "In The Depths of the Memory" is a tribute to the classical composer Camille St-Saëns and remains the best known and most listened SKy76's track. Two EP's will follow , in 2014 and 2016.