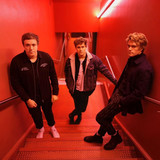 Tors create thistle-thick textures and stylistic indie-folk songwriting akin to The Mystery Jets. Having toured Europe with the likes of Tom Walker, John Newman, Picture This, Billy Lockett and Walking On Cars the band are set to do their biggest headline show to date on 13th Feb at London's Scala. Following demand from their fans 2020 will see the band release new music every month. Tors are named after a collection of different rock formations in Devon, where Matt and Theo Weedon (two thirds of Tors) hail from. The brothers, who started the band together, are grandsons of the late Bert Weedon, a famous guitarist during the 50's and 60's, and writer of Play In A Day; a book which has been credited by Eric Clapton, Paul McCartney, John Lennon (to name a few), for their guitar abilities.