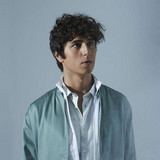 His first tracks were spotted and immediately embraced by Radio Nova and by Les Inrocks (Kazy Lambist won the people's choice award at the Les inRocKs Lab live contest). He also came up with the soundtrack for Dessin-Destin, the Jean-Charles de Castelbajac exhibition at La Panacée in Montpellier - a project that subsequently led to a vinyl being released, for which JCDC designed the cover. Kazy released his first album "33000 FT" in 2018. His new EP "Sky Kiss" is released on February 7, 2020. It features collaborations with Glasses, Amouë, Jowee Omicil and JB Dunckel , half of the legendary band Air .