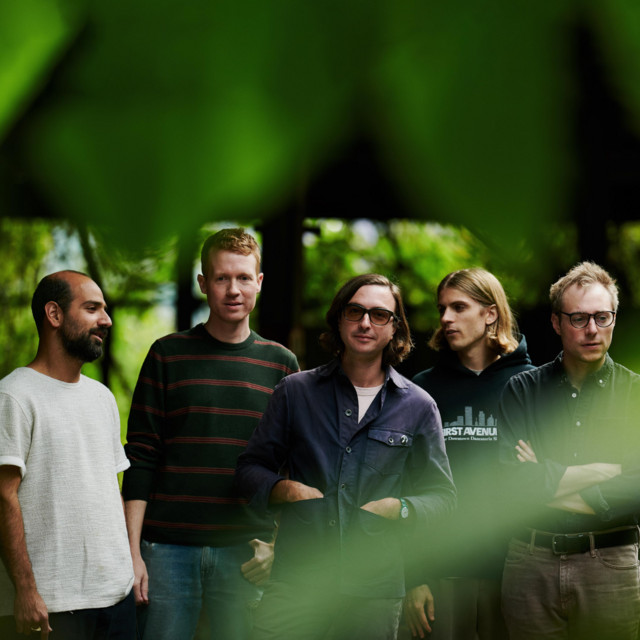 New Jersey's Real Estate helped usher in a warm, hazy style of indie rock that came into prominence in the late 2000s and the start of the 2010s. The band's breezy melodies, jangly guitars, relaxed vocals, and generally laid-back approach to songcraft hid musical complexities on standout albums like 2014's Atlas. As the years went on, their original lineup splintered and new songs explored getting older, parenthood, and a new wealth of mature topics, still delivered in the band's reserved, mellow style. Real Estate was formed in Ridgewood by lead singer/guitarist Martin Courtney (Predator Vision and formerly Titus Andronicus), guitarist Matthew Mondanile (Ducktails), bassist Alex Bleeker (Alex Bleeker & the Freaks), and drummer Etienne Duguay (Predator Vision). The foursome had played together -- including in a Weezer cover band -- during high school, but didn't become Real Estate until Courtney returned to the Garden State after attending college in Olympia, Washington. After forming in summer 2008, the band began playing live that fall and released the "Suburban Beverage" 7", which introduced Real Estate's brand of surfy, lo-fi pop, early in 2009. A song on the Underwater Peoples Records Showcase and the Fake Blues EP appeared that summer. The band spent the fall touring with Girls before their self-titled debut was released by Woodsist. The quartet joined the Domino Records roster in 2011 for its sophomore effort, Days, which hit the shelves and the Billboard charts in the rock, alternative, independent, and vinyl albums categories. It reached number 52 on the Billboard 200. Shortly following its release, the band went through a lineup change with Duguay dropping out; he was replaced by drummer Jackson Pollis. The group was also joined at that point by auxiliary member Jonah Maurer on keyboards and additional guitars. This new assemblage of Real Estate toured feverishly for the well-received Days, though by their return in 2014 with third album Atlas, Maurer had been replaced by Matt Kallman. That LP went on to rank higher on all the same charts, landing in the Billboard 200's Top 40. Following a short break for other projects, including Courtney's solo debut, in May of 2016 Real Estate announced that Mondanile was leaving the band to focus on Ducktails. He was replaced by Julian Lynch, and the quintet of Courtney, Bleeker, Pollis, Kallman, and Lynch released In Mind in March 2017. Three years later they returned with their fifth studio album The Main Thing. The album explored themes of growing up mixed with a healthy fear of an oncoming apocalypse. The album was preceded by a surreal video for first single "Paper Cup." as well as the release of a signature red wine, bottled in collaboration with Echo Echo Wine Company to help promote the new album. ~ Heather Phares & Marcy Donelson, Rovi