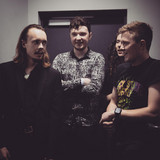 Saint Sapphire as a sound emerged from a place in between the artistic indie/pop movements and the punk movements in the North of Ireland, taking upbeat songs but also hitting them really hard, while also providing their own streetwise swagger, unique musicality and infectious hooks, writing songs about life in Belfast and beyond in the 21st century. The band is made up of three lads from across Northern Ireland, frontman, guitarist and primary songwriter Sam Morgan, drummer Adam Walker and lead guitarist Danny Martin, together they bring their ruckus sonic assault to the people of Belfast and beyond, and firmly on their own terms. Having gained the attention of the people at BBC Introducing, RTE Radio in Dublin and many more, the band’s following continues to grow rapidly.