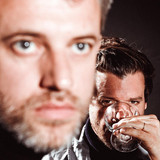 Don’t even try to find the meaning of “Temperplane” in the Webster. The word is the fruit of Jean Waterlot’s imagination, an attempt to capture the momentum that lead to the release of the 3rd album of his band Montevideo: a fantasized plane that would allow you to fly through various degrees of emotion, from where you could observe our planet Earth from above, far above. Nonetheless it’s a more conventional plane that Montevideo took to record those 8 songs, heading to New York to work with Joakim who established his Crowdspacer studio in Brooklyn a few years ago. The band decided to extend the fruitful collaboration with the French producer started on their 2nd LP “Personal Space” in 2012. So fruitful that they also signed the record to Joakim’s label, Tigersushi. http://www.montevideo.be/<br>