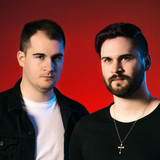 Chil, the Alternative Indie-Pop band, formed in 2007 by brothers Nick & Ben Batton in Kent, OH. The pair have since released 3 EPs, a selection of singles, and have gone on to receive radio play in 6 countries in Europe, Canada, and the United States. Chil has written & recorded with the likes of Al Groves (Producer of Bring Me The Horizon's Thats the Spirit), Austin Bello (Forever the Sickest Kids), and Rian Dawson (All Time Low). Chil has played with As It Is, CRUISR, Jesse McCartney, Rae Sremmurd, Trendy, and many more! The current campaign is a grouping of explorative alternative singles recorded in The Motor Museum (Liverpool, England) with producer Al Groves.