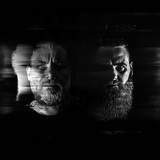 Crown started out in 2011 as 2 men and a drum machine, and their debut album instantly got them an invitation to the prestigious Roadburn festival in 2013, and a record deal with Candlelight. The duo's early sound was defined by hissing electronics, soaring heavy guitars and the absence of “real” drums, touching on industrial metal acts like Godflesh, Ministry or Killing Joke. The End Of All Things' is clearly a departure from that sound in almost every imaginable way. Dark and moody; bleak and sublime; airy and crushing; mesmerizing and engrossing; bold yet unerring; strident, groovy and suffocating, all at the same time. An album oozing with tasteful, fragile hooklines flirting with the abyss they are hovering above, encapsulated within an ingenious major production. 'The End Of All Things’ is a seminal album, which could well turn into a new 'Shape Of Heavy Music To Come'.