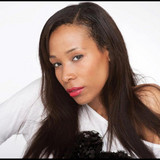 At age thirteen I discovered my love for music and wrote my first two songs, “Hair” and “Beauty Queen.” Being a girly-girl, I wrote happy pop songs about pretty things but eventually dove into exploring different styles of music. I even got a karaoke machine to practice singing. I was discovering all types of music but my heart belonged to pop. I was sixteen with a dream of music and fame. In 2007, I got into a studio to learn about recording and production. I worked with a guy named Milton in the Bronx, NY. He taught me almost everything I know. At our first session he had me write and arrange a song in 30 minutes. We recorded it the same night. He couldn’t believe I had never recorded before. I am heavily influenced by: Rihanna, Gwen Stefani, Mariah Carey, Madonna, Pink, Cyndi Lauper,Kylie Minogue, and Robyn. My style of music is a blend of pop and electro dance beats. I love unique sounding and catchy rhythms. I released my second EP, “Femme Fatale,” in late 2010.

My video for my second single, “Shadow Dancer,” is one of the 1st 3D Music Videos. My third EP came out recently, “Model behavior. I have performed at venues such as: